Trend Lines are an important tool in technical analysis for both trend identification and confirmation. A trend line is a straight line that connects two or more price points and then extends into the future to act as a line of support or resistance. The general rule in technical analysis is that it takes two points to draw a trend line and the third point confirms the validity. 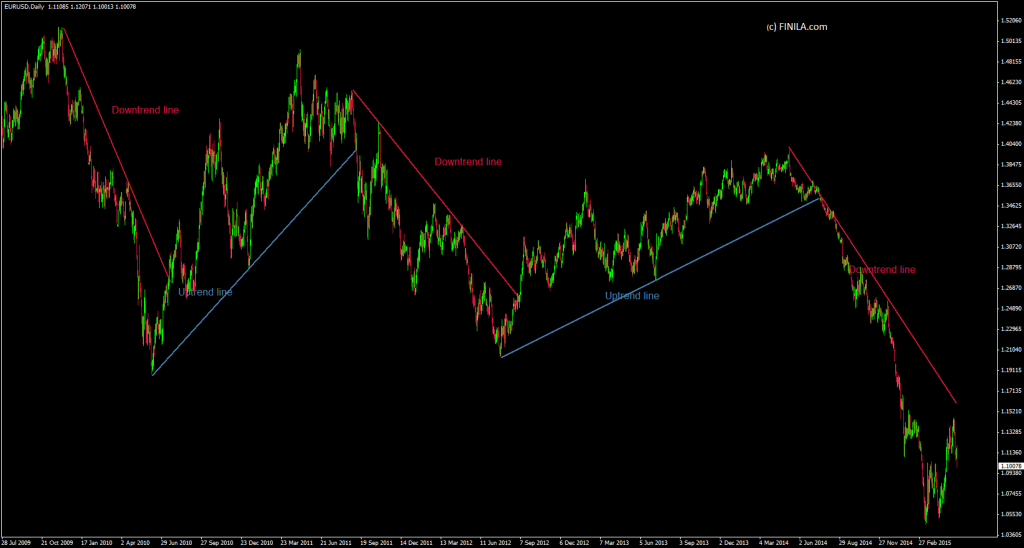 High points and low points appear to line up better for trend lines when prices are displayed using a semi-log scale. This is especially true when long-term trend lines are being drawn or when there is a large change in price. Most charting programs allow users to set the scale as arithmetic or semi-log. An arithmetic scale displays incremental values (5,10,15,20,25,30) evenly as they move up the y-axis. A $10 movement in price will look the same from $10 to $20 or from $100 to $110. A semi-log scale displays incremental values in percentage terms as they move up the y-axis. A move from $10 to $20 is a 100% gain, and would appear to be a much larger than a move from $100 to $110, which is only a 10% gain.

Sometimes there appears to be the possibility for drawing a trend line, but the exact points do not match up clearly. The highs or lows might be out of whack, the angle might be too steep or the points might be too close to each other. If 1 or 2 points could be ignored, then a fitted trend line could be formed. With the volatility presence in the market, prices can over-react, and produce spikes that distort the highs and lows. One method for dealing with over-reactions is to draw internal trend lines. Even though an internal trend line ignores price spikes, the ignoring should be within reason.

Sometimes, there is a price cluster with a high or low spike sticking out. A price cluster is an area where prices are grouped within a tight range over a time period. The price cluster can be used to draw the trend line, and the spike can be ignored.